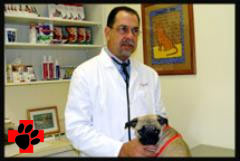 In 1994, Dr. Puig came to the United States, received his license, and worked as an Emergency Relief Doctor. In 2003, Dr. Puig opened the Animal Clinic of Village Square and has practiced here ever since. Dr. Puig goes above and beyond to meet the needs of his clients and patients, delivering the highest quality in care and customer service, ensuring that all patients receive special and personalized treatment. He is fluent in English, Spanish, and French. He has a Dog named Chief and a Cat named Sweetie.

Deborah graduated from St. Petersburg College with her Veterinary Technician associates degree and is currently in the process of obtaining her bachelors. She is a certified veterinary technician and has been working at the Animal Clinic of Village Square since 2012. She has always wanted a career centered on animals and their well-being.

Justin was born and raised in South Florida. He has been around and cared for animals for most of his life. On top of caring for his pets, he volunteered for two years as an animal handler for the Museum of Discovery and Science. Justin has happily been with the Animal Clinic of Village Square since 2011. He attends the University of Central Florida and is studying Human Communication and Political Science.

Kristell was born in Colombia, South America. She studied in La Salle’s University under the Veterinary Medicine program and is undergoing her medical training at the Animal Clinic of Village Square in order to receive her degree. Her experience working at the clinic has been incredible so far. Kristell loves animals and has a Yorkie named Pollie. She also speaks Spanish and English fluently.